The changing of the vestments of Saint Stefan of Piperi 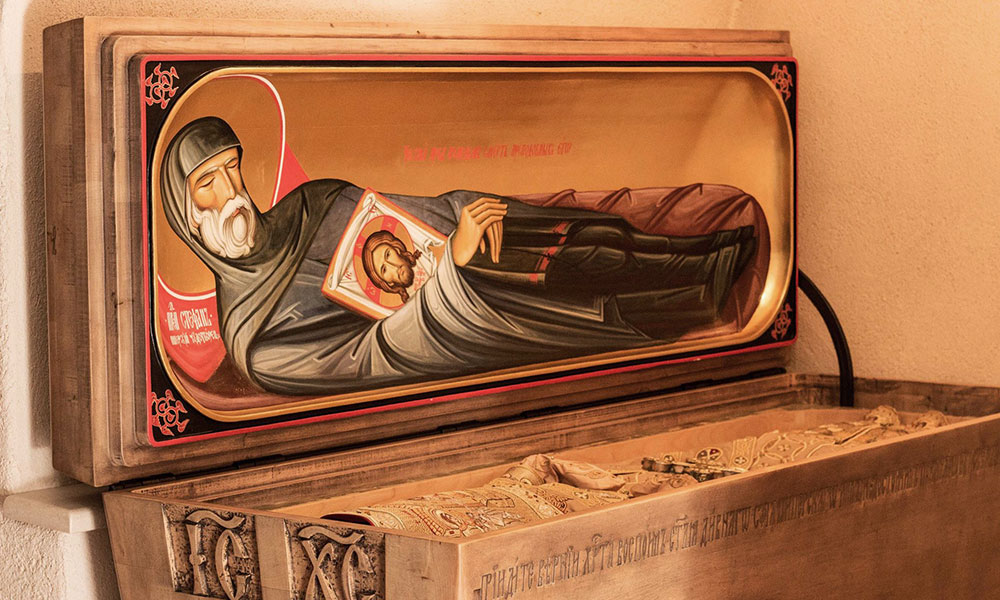 On Sunday, May 30, 2010, the Piperi monastery celebrated their Patron Saint-day, the feast-day of the venerable Stefan of Piperi. The Divine Liturgy was served on the occasion of this great Feast, the changing of his vestments and the laying of his sacred relics in a new casket.

His Grace Amfilohije, the Archbishop of Cetinje and Metropolitan of Montenegro and the Coastlands, presided over the Holy Hierarchical Liturgy. Co-celebrating with His Grace was Bishop Joanikije of Budim and Niksic. The numerous clergy, hieromonks and the faithful took part in this solemn assembly that was especially graced by the presence of the Abbot of the Athonite Simonopetra monastery, Archimandrite Elisha. Many guests from abroad, as well as a large number of public figures were in attendance.

The changing of the vestments of Saint Stefan of Piperi took place after a lapse of over three hundred years. The previous reliquary that contained his relics dates back to 1908. The laying of the Saint in a new coffin takes place every hundred years, and the two previous ones are kept in the monastery. 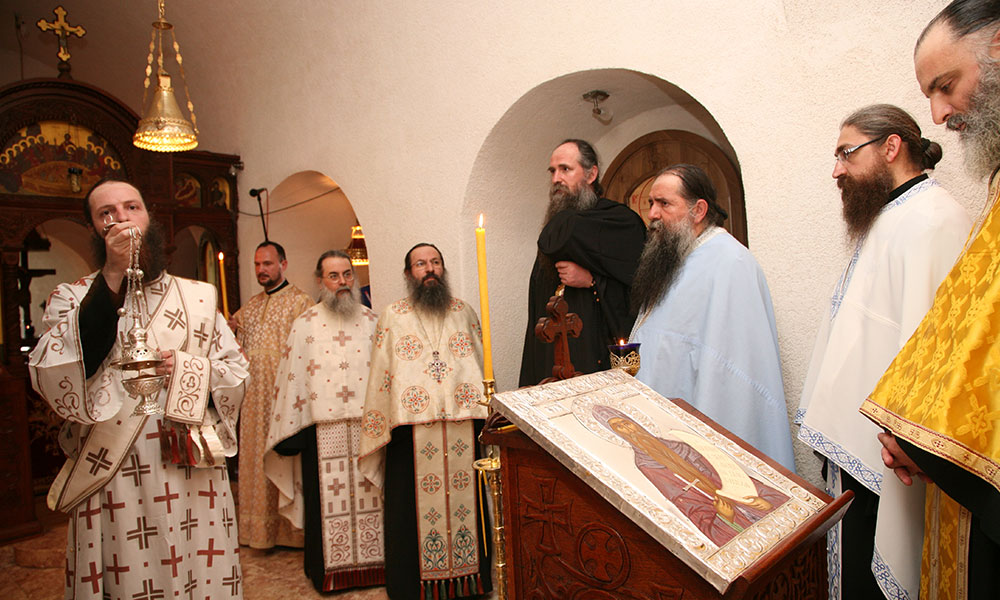 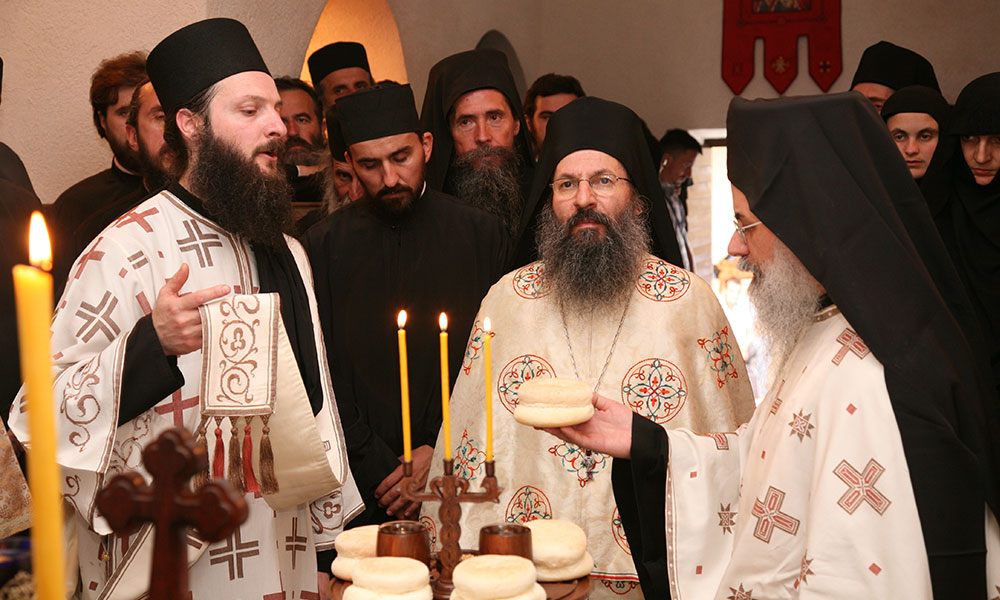 The ceremony began with the solemn vigil officiated by Archimandrite Elisha, the Abbot of the Athonite Simonopetra monastery, with the participation of His Eminence Metropolitan Amfilohije, Archbishop of Cetinje, Metropolitan of Montenegro and the Coastlands , and His Grace Joanikije, Bishop of Budim and Niksic.

After the vigil, vestments were changed and the relics of Saint Stefan of Piperi were placed in the new coffin with an icon painted on the inside of the lid. The relics were dressed in new vestments hand sewn by the nuns of the monastery of St. Luke in the parish of Niksic, the birthplace of the Saint. 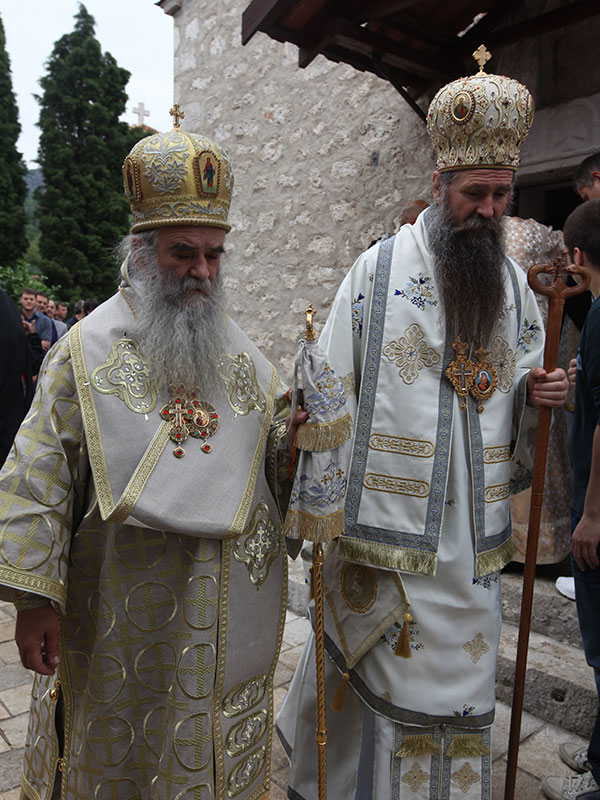 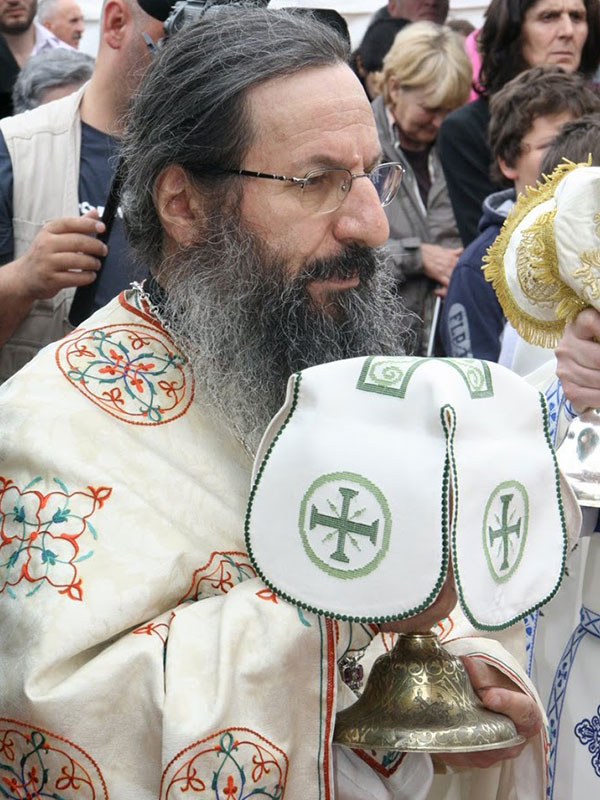 The following day, Metropolitan Amfilohije with the concelebration of Bishop Joanikije and clergy served the Divine Liturgy in the portico specially built for this occasion in front of the main entrance to the inner monastery yard.

The Divine Liturgy and the Vigil were made more resplendent by the Byzantine chant, sung by the monks of the Simonopetra monastery and nuns from the monastery of Saint Stefan near the city of Vranje. 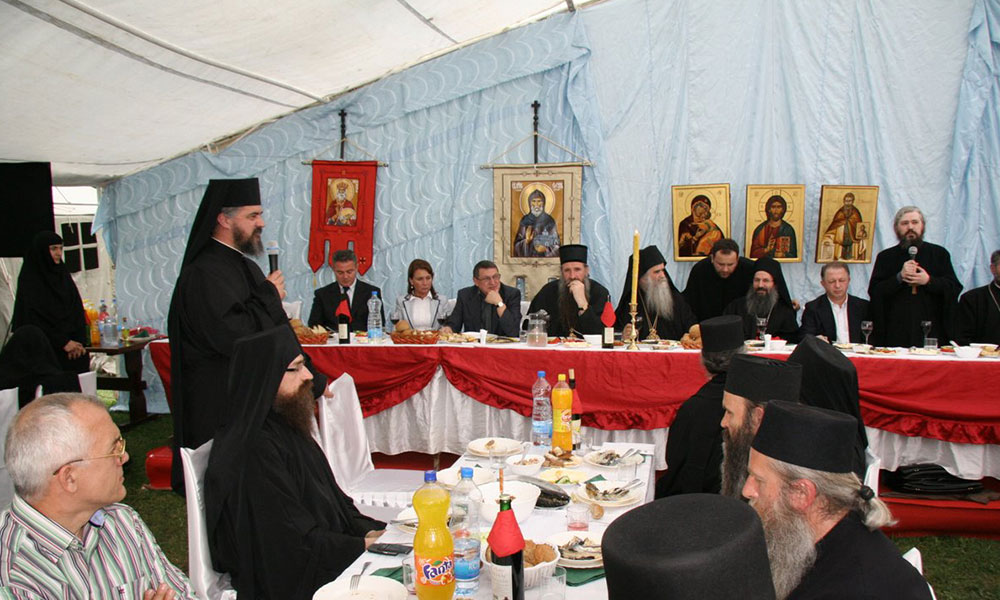 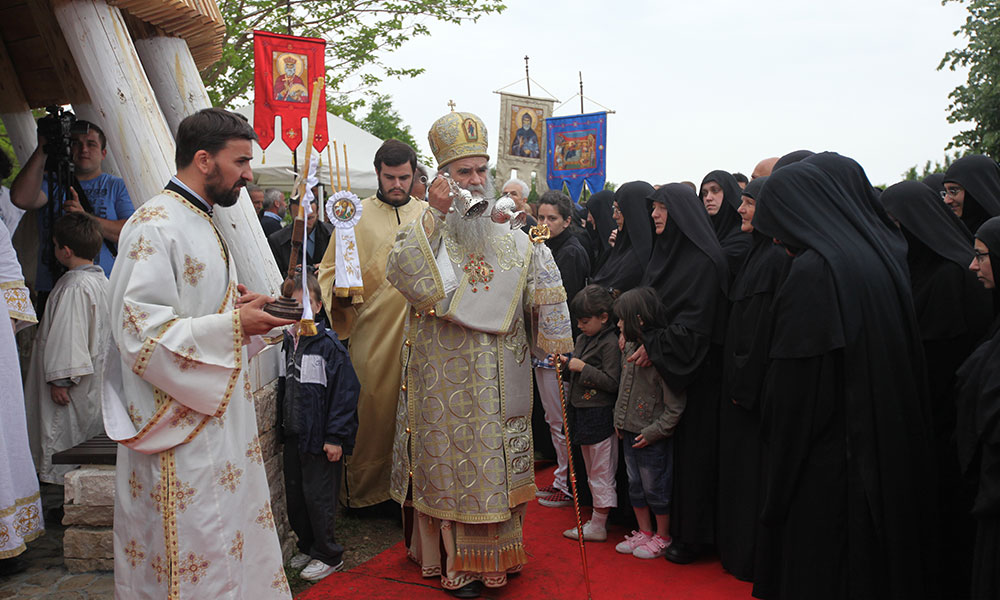 In his sermon at the Liturgy, Bishop Joanikije said he was certain that Saint Stefan of Piperi had connections with the Holy Mountain and received that unique Athonite spirituality: “He was a hesychast, and the hesychast is the one who puts all his hope in God, who continually serves God by fasting and prayer. But that does not mean that they live in complete seclusion, even though we know that Saint Stephan was a recluse, and withdrew into the mountains of Rovci to pursue a monastic life.” 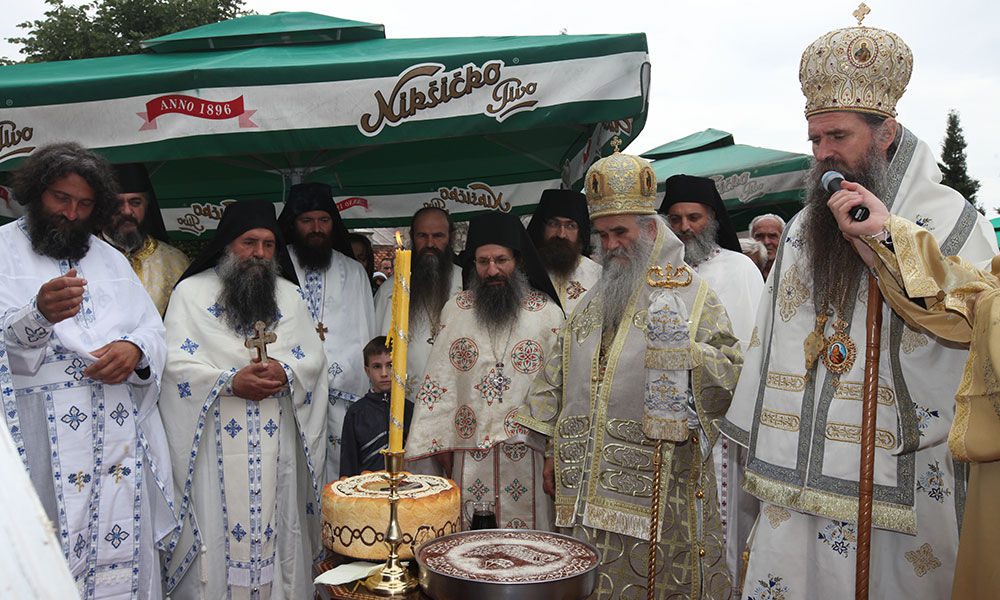 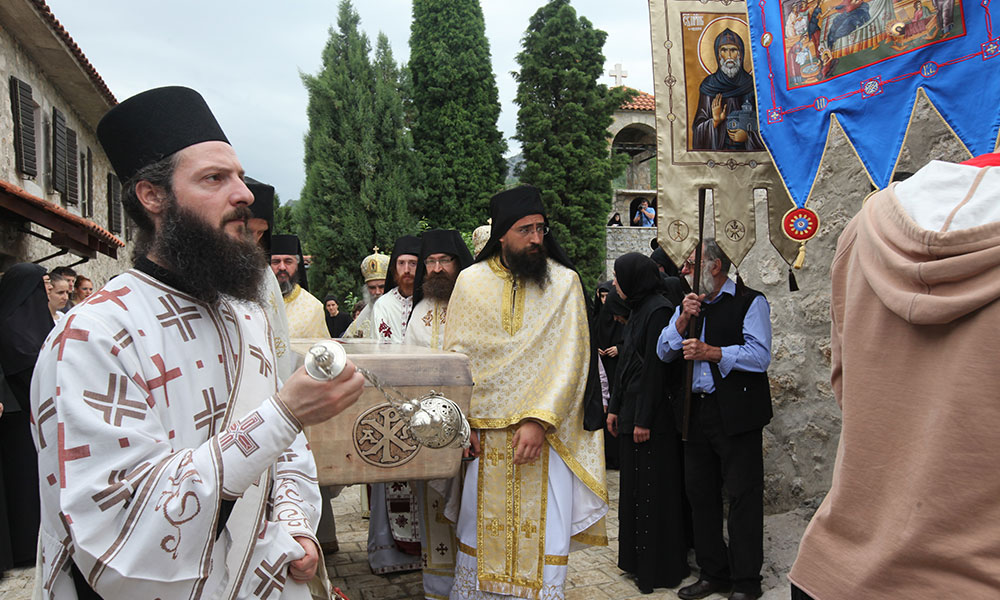 “Being filled with the grace of the Holy Spirit, he became a true spiritual father to his people, as well as a pastor and teacher. He gathered the monastics and the people before the throne of God, he gathered then in the name of Christ, he safeguarded them by the power of his prayers, and nurtured them with the heavenly bread. For having carried such a cross, he was sanctified. Near the end of his life he settled here in this sanctuary, which he himself had built. And here he gave up his spirit to the Lord. Soon after the falling asleep, he was glorified as a Saint.”

“He was the younger contemporary of St. Basil of Ostrog and shared in his fight for independence, for upholding the pledge of freedom and adherence to Orthodoxy. The advocates of the union with the Latins had already reached Cetinje, but the Lord preserved the faith at that time, through Saint Basil and Stefan of Piperi,” said Bishop Joanikije.

At the Little Entrance His Grace Metropolitan Amfilohije served the rite of elevation with prayer and blessing for nun Jelena (Stanisic), the monastery’s superior, installing her with Cross and staff as Abbess of the Piperi monastery. Metropolitan Amfilohije said that she heard the voice of the Lord even in her youth. “She heard and listened to that voice. She has resolutely taken the path of God by having taken the monastic vows, by solemnly promising to the Lord to carry the illumined lamp of her heart and mind, and to burn like a candle before the face of the Lord,” said the Metropolitan. 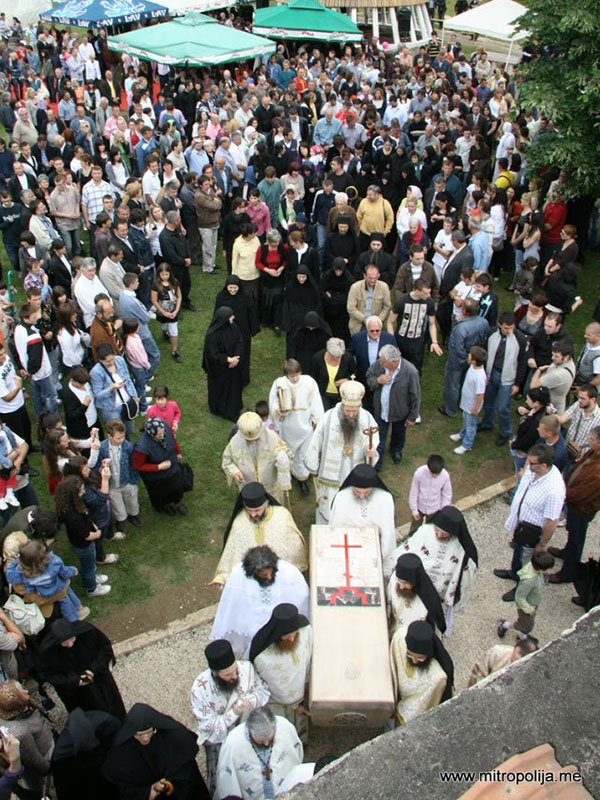 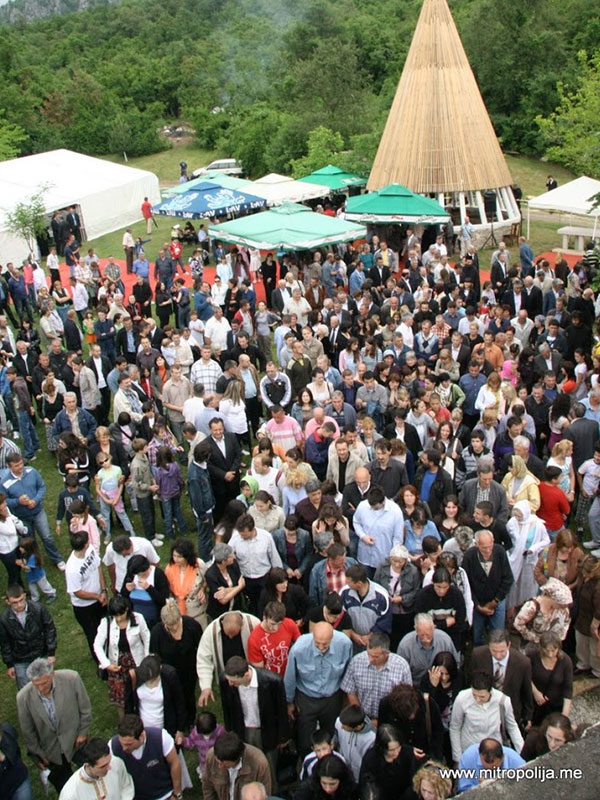 The liturgical assembly in the Piperi monastery was attended by numerous guests from the Metropolitanate of Montenegro, the Eparchy of Budim and Niksic, as well as from numerous monasteries (Zica, Petro-Pavlov monastery near Trebinje, St. Stefan near Vranje, Ekaterinburg, and from Kosovo and Metohija).

Among the participants of the assembly were the Ambassadors of Russia, Serbia, Bosnia and Herzegovina and Ukraine from Podgorica: Jakov Gerasimov, Zoran Lutovac, Branimir Jukic and Oksana Sljusarenko. The Minister of Religion in the Government of Serbia, Bogoljub Sijakovic, was also present. The Ministry, together with the Government of Montenegro, played a significant role in organizing the gathering. Other distinguished guests were also present.

Metropolitan Amfilohije and the administrators of the Piperi monastery gave recognition and presented hierarchal Gramata to those most deserving for the organization of this great feast.

The monks of Simonopetra presented Metropolitan Amfilohije with the New Testament in metal binding, the front cover engraved with scenes from the Book of Revelation. They also presented the monastery with liturgical implements and a pectoral cross for the Mother Superior.

Metropolitan Amfilohije presented Archimandrite Elisha with an icon of Saint Stefan Piperi that Father Lazar had found in the Monastery. He presented Father Alexis from Ekaterinburg with a wooden carving with the image of Saint Stefan. He sent gifts to Abbess Nicodemi of the prominent monastery Ormylia, a dependency of Simonopetra.

A cultural program followed the Liturgy.